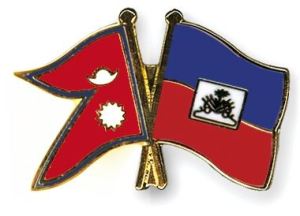 When I heard about the earthquake in Nepal and saw the pictures, it made me remember the earthquake that hit my country Haiti 5 years ago. I remember what that felt like: I remember the dust, the panic, the fear because you can no longer trust the ground beneath your feet. Even though Nepal is halfway around the world, I feel you are my family because I know some of the pain you are going through now.

Even in the photos and videos, I see so much solidarity between Nepalis – and I would like to ask my Nepali brothers and sisters to hold onto that. We Haitians stayed strong through solidarity in the few days after the earthquake, and then we became divided. Don’t let that happen to you – you are a proud people with so much history and culture, so hold onto that and you will emerge strong.

I said this to my friends in the Philippines after the typhoon: you are more than the disasters you suffer. You are not victims – you are survivors, you are heroes, and you will rebuild your country. Your brothers and sisters in Haiti are here to tell you that the ground will stop shaking, the dust will settle, and you will live on to build a new Nepal. And for those who have been lost today, the world will honor their memories.

This morning, a Haitian news outlet, LoopHaiti, published the latest travel advisory of the Canadian Embassy. In it, the Embassy warned its citizens against going to many of Port au Prince’s poorer neighborhoods, such as Belair, Martissant, and Cite Soleil, because they are “unstable and dangerous”. A few years ago, no one would have blinked […]

Perhaps you’ve seen the pictures circulating around your Haitian friends’ Facebook pages. People taking selfies, holding up a few crumpled gourdes to a camera, with the hashtag #KonbitBibliyotek. If these photos have seemed pleasant but mysterious, let us explain: it is part of a movement that started in Cite Soleil, Haiti’s biggest ghetto. A place […]

The #KonbitBibliyotek campaign started with a simple idea: young people in Cite Soleil, Haiti’s largest ghetto, wanted a community library. Instead of going the traditional path of writing a proposal to an outside donor, they instead decided to start at home, asking their friends and neighbors (some of whom live on less than $2 a […]

Leadership is homegrown. There are hundreds of books written in dozens of language about what it means to be a leader, but that definition is rewritten in each country, each culture, each community. In Cite Soleil, Haiti, for the longest time, leadership was defined as the number of guns you had under your control. As […]

It was a simple and impossible idea: build a library in Cite Soleil, Haiti’s largest ghetto, entirely through community contributions. Crowd-source thousands of dollars in a place where formal employment is rare, where a lack of credit cards make online platforms like Kickstarter impractical, and where foreign aid agencies pay for most major infrastructure. But […]

#KonbitBibliyotek is a community crowdfunding campaign to build a library in Cite Soleil, which is Haiti’s largest ghetto. By combining Haitian traditions like konbit with the modern tools of social media, this initiative has spread like wildfire across Cite Soleil and beyond. It has already brought over 300 people together to raise $2400 and collect over […]

Where there is no water

I was born in Gwasimal, St Raphael a remote corner of rural northern Haiti, and I grew up in Cite Soleil, the largest ghetto in the Caribbean. I grew up with hunger, with gun violence. I have traveled the country as a researcher and community mobilizer, and saw communities barely holding onto the bare sides […]

Seeing the effects of Hurricane Matthew up close, and through a different lens

Reflections from Robi, translated by Sabina     Yesterday, I was standing on the banks of the Grey River in Vodrey, a rural community in the north of Cite Soleil who was badly affected by the flooding of that river in the aftermath of Hurricane Matthew. I hadn’t come alone – behind me were over […]

Solidarity in the storm: Hurricane Matthew

It has been a strange past few days for Haiti, waiting for the landfall of the powerful Hurricane Matthew. Yet perhaps the strangest thing was how familiar it all felt – the impending danger, the skepticism and fatalism of my fellow Haitians, the news headlines with “Haiti” and “crisis” and a few foreboding adjectives. Every […]

A message from Haiti to Nepal